Our Wall of Fame 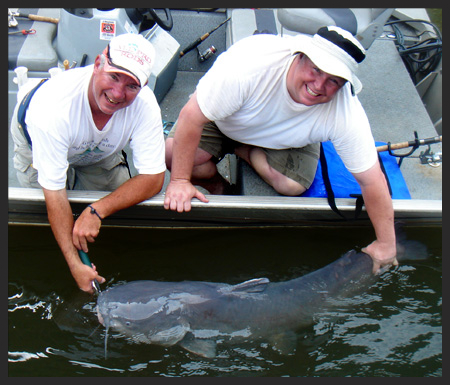 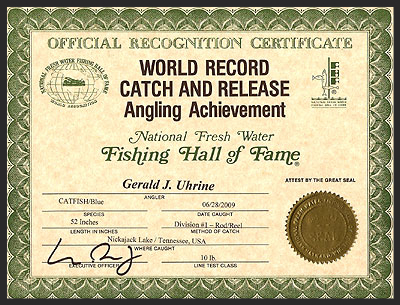 The fish hit like any other, and when you are fishing with light tackle you really never know if it's a beast on the end of the line or just another ordinary 10-pound catfish. But when they swim away and don't stop... or even slow down... you soon realize that you are attached at the hip with a huge mass of sleek blue muscle. Jerry Uhrine figured that out in a hurry when a world record catfish took him for a ride while he was fishing with Richard Simms of Scenic City Fishing Charters on June 28, 2009.

A few weeks later the National Freshwater Fishing Hall of Fame declared that according to their record books, Jerry's's catch is the biggest blue catfish ever reeled in on 10 lb. test line, and then released. Uhrine, from Thompson Station, Tenn., now holds the Hall of Fame's 10 lb. Line Class World Record in the Catch & Release category.

His massive blue catfish was 52 inches long and weighed a shade over 75 lbs. on my digital scales.

Uhrine's fish, which he hooked using chicken breast as bait, was just 5 inches shy of the Hall of Fame's world record blue catfish caught on all tackle, which was 57 inches.

Jerry and his friends, Ted Boozer and Gary Hatchcock, came down from the Nashville area to fish with me. They all caught some quality cats, but watching Jerry go toe-to-toe with the beast was obviously the highlight of the day.

"Out of all of us Jerry is probably the one that could have brought that fish in,'' Hathcock said. "He is a finesse fisherman. He is skilled at playing the line. He was playing a chess match with the fish."

We were in the tailwaters of the Chickamauga Dam and we had to do some nifty maneuvering to try and keep the huge fish out of the current, yet keep the boat away from the concrete walls below the dam.

I frequently have clients fishing light tackle in the Chickamauga Dam tailwaters. The water is relatively shallow and light tackle is far more effective, plus it's a lot more fun. However I always tell folks, "there is always great potential to get your heart broke."

After getting a glimpse of Jerry's fish when it surfaced, I feared the story might end with such "heart break." But Jerry knew exactly when to let the fish run, and exactly when he could give it some added pressure to wear it down.

All my clients know that I rarely carry a net. A net that's big enough to land a 75 lb. fish is simply too large and wieldy in the boat... I'd rather have the space, and allow clients to play a fish all the way to the finish. But I'll admit that this was one time I was wishing for a big wieldy landing net.

Nobody checked a watch, and in the heat of battle it is really hard to have an accurate sense of time. But I estimate that Jerry fought the fish for at least 45 minutes, and possibly an hour. But using patience over power, Jerry was able to wear the best down until I could get my hand and the "grabbers" on its lower jaw to haul the beast in the boat. There were obviously high 5's all around.

I always encourage clients to release big "trophy cats." Partly because there is simply no effective way to hold them and to keep one basically means you have to quit fishing and head for home. But more importantly, when folks lay eyes on such a magnificant creature, their first thought is always to "let him go."

That's what we did. It was actually a day or two later that a friend prompted me to check on existing line class world records. I was somewhat surprised to learn that Jerry's fish eclipsed the Hall of Fame's 10 lb. class world record by a huge margin.

I've had multiple clients catch fish in the 30, 40, even 50-pound class catfish on 8 and 10 lb. test line. Of course it doesn't happen all the time... or even most of the time. But when it does, it's the thrill of lifetime and an achievement few anglers will ever know.

Just remember, "patience over power," and maybe someday you too can have your name in the record books. 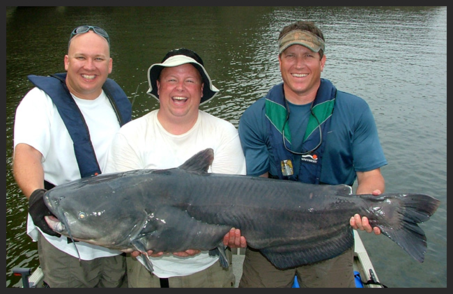